Stalking, the following and harassment of another person, occurs among all age groups and social groups, as well as among all genders. That goes for those affected by stalking, as well as for the people who stalk.
In many cases, it presents a significant problem for both sides. The consequences for those affected by stalking can include anxiety, panic attacks, depression, sleep disorders, psychosomatic complaints, the inability to work, social withdrawal and loneliness, i.a..
Yet the people who stalk often suffer from their own stalking behaviour and its possible effects too. Effects such as inner emptyness, low self-confidence, feelings of shame and guilt, frustration, a loss of control, loneliness and social withdrawl, problems with the police and the justice system, and a loss of time and energy, i.a..
We consider stalking to be an occurance, which is often preceeded by an unsuccessful relationship set-up (Fiedler 2006). Thus it does not affect an isolated individual, but rather people, who have history with each other; a history of which one person does not want to let go. Sometimes signals of closeness or distance are misinterpreted, sometimes the person who is stalking believes that he/she still has a right to more detailed explanations, sometimes the person affected by stalking finds it difficult to clearly and unequivocably distance him/herself.
However, the responsibility and the criminal culpability for the stalking lies with the person who stalks. We want to work out with him or her, what he or she needs, in order to be able to live autonomously again without stalking.
The counselling centre Stop-Stalking therefore advises both those affected by stalking and people who stalk, as well as relatives and people who deal with stalking in a professional context.
Furthermore, we consider our task to be to raise awareness and inform the public regarding the topic of stalking, as well as to build up a network, in which counselling institutions, public offices and law enforcement agencies can work together. Only in this way can stalking be constrained effectively.

The English term stalking originally comes from hunting language and means “to hunt“, “to follow“ or “to pester“. Since the early ninetees, the term has been used, initially in English-speaking areas and later also in Germany, as a description for social behaviour which involves pestering and harassing another person. Since then, stalking has described the deliberate and persistent pestering and harassment of a person, who does not want this and finds unpleasant. A number of different types of behaviour can occur in doing so:

Contrary to widespread perceptions and occasional portrayal in the media, stalking is not primarily a “celebrity problem“, but rather occurs among all age groups and all social groups, both with regards to those affected by stalking, as well as the people who stalk. Here, both women and men are among those who stalk, as well as among those who are affected, whereby ca. 80% of the people who stalk are male and ca. 20% are female, and vice versa for those affected. Those affected by stalking are predominantly former partners, but also acquaintances (from their social spheres or the internet), colleagues, doctors and therapists, i.a..

Stalking is so widespread and impacts those affected so severely, that it is prosectuable since March 2007 through the specific offence of stalking (§ 238 StGB) and every person affected can receive protection and support.

Possible expressions of cyberstalking are, i.a.:

– Disseminating information or pictures via email, Twitter, in social networks and on blogs against the will of the person affected

– Identity theft, fake entries or fake accounts on the internet

– Systematic following and spying of the internet activities of the person affected, as well as systematic research on private information

The phenomenon of cyberstalking posseses a few particularly negative characteristics, which facilitate the occurance, continuance and escalation of stalking behaviour.

Thus, publicity can be established through the internet, third parties can become involved, and real campaigns can be initiated against affected persons. The low threshold of stalking cases being dealt with also plays an important role: contact can be made independent of time and wherabouts, as well free and anonymously, and does not require personal contact to the affected person. The lack of real contact prevents the development of empathy for the stalked person. Through the lack of social controls, emotions such as anger, jealousy and need for power are not restricted and regulated, but can be freely acted out. In addition, the increased activity with the virtual world of the internet can facilitate the construction of relationships, as well as a loss of reality.

Stalking poses a particular problem if there are mutual children involved from the preceeding partnership. The particular problem in such cases arises when the parent affected by stalking is unable to cut off contact to the stalking parent completely, as this person still has custody and/or access rights, and arrangements must be made regarding handing over the children in change in care, as well as regarding daycare, school, visits to the doctors etc. In this context and by asking children about the way of life of the other parent, the stalking parents know a lot about the everyday routine of the persons affected and they can easily be „looked out for“, for example at the children’s school.

Matters are further complicated in these cases, as it is not easy for outsiders, as well as for involved offices and institutions, to distinguish in what repects children are being exploited and where legitimate interest stops, and where unambiguous stalking begins. In this context, it can lead to the person who stalks‘ desire for contact being unintentionally aided, and the need for protection of the victim being harmed. Joint discussions with youth welfare services, judicical conditions of mediation, and couple and family therapy are contraindicated in stalking cases.

At the same time, it must be considered that for the parent, from whom the stalking originates, the loss of a partner and restrictions in access to his/her own child can be highly threatening and can often lead to an existential crisis. A strong knock to feelings of self-worth, experiencing unfairness and the severe humiliation of losing his/her role as a parent must be worked on promptly, as the danger of an inappropriate coping through stalking and/or other treatment is increased.

In the case of escalated separation conflicts with mutual children and disputes regarding custody and access rights, the welfare of the child and the justified interests of the parents must be weighed up against the instrumentalisation of the children for stalking. In cooperation with the youth welfare services and family courts, Stop-Stalking offers both parents who stalk, as well as parents who are stalked, counselling that takes the special circumstances into consideration.

Furthermore, the affected children and young people should be offered corresponding counselling and support, either in a community counselling centre for children or families, or with an established child or youth psychotherapist. 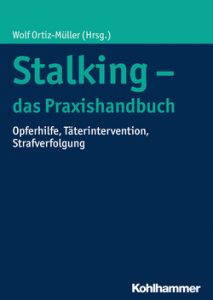